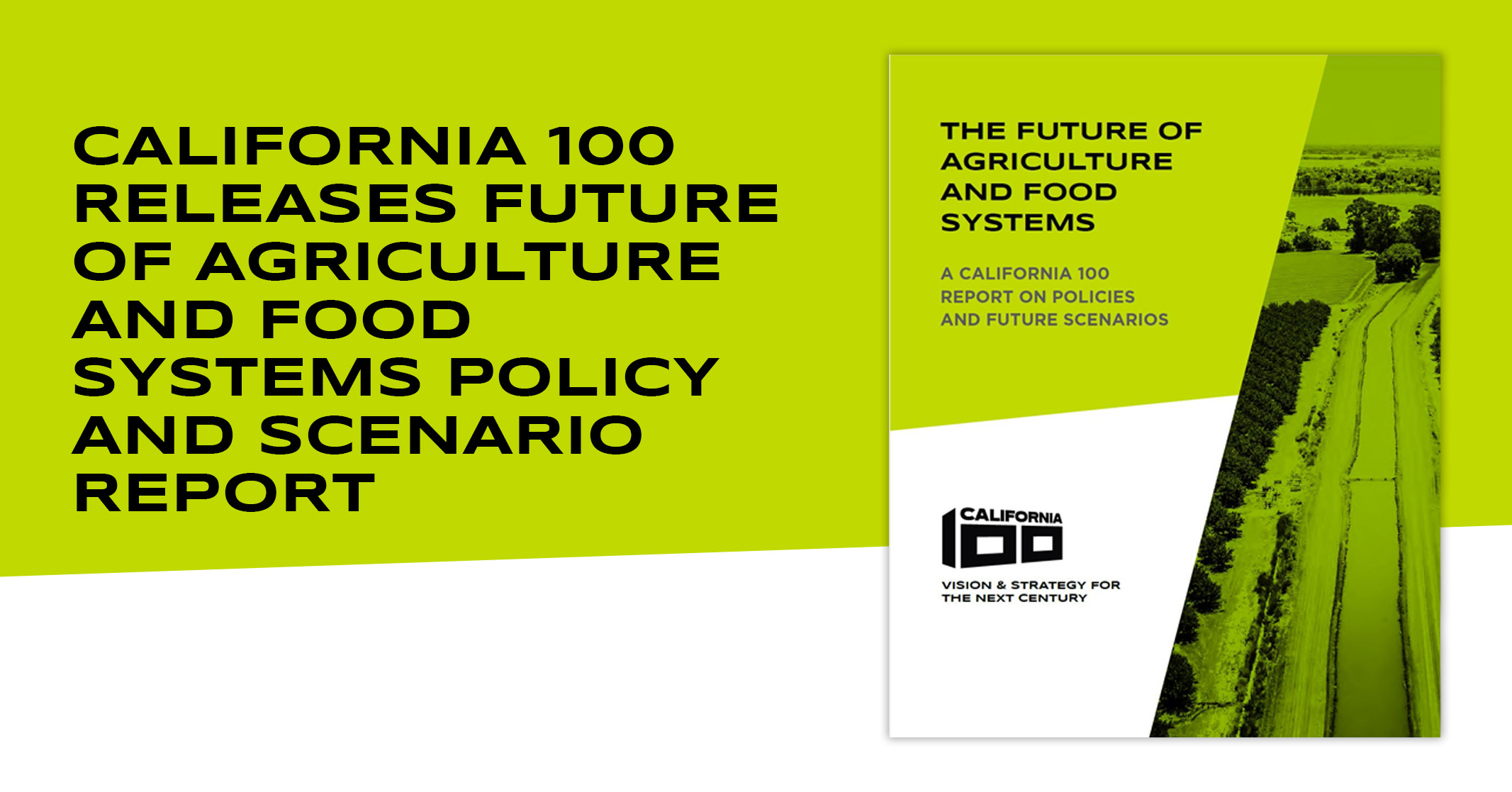 California 100, a research and policy initiative incubated at the University of California and Stanford University, released today its fourteenth policy and future scenario report focused on the future of agriculture and food systems in the Golden State. The report examines how Californians are continuing to design innovations intended to improve resilience, sustainability, and equity in the food sector, but also addresses the challenges that may confront the industry in the future.

California 100’s research work is led by Henry Brady, Director of Research for California 100 and former Dean at the UC Berkeley Goldman School of Public Policy. Faculty at the Cal Poly San Luis Obispo College of Agriculture, Food and Environmental Sciences led the research and writing for this report.

California occupies a unique and significant role in international and national food production and distribution. In 2020, the United States was the largest exporter of food with $124 billion in exports—10 percent of total global exports. In fact, the U.S. is the largest global producer of almonds, pistachios, milk, and poultry, with much of this production coming from California. Since its formation as a state nearly 175 years ago, California has extended its sphere of influence in agricultural production through large-scale irrigation projects and easily available cheap labor. In addition to producing food for its own residents—who comprise 12 percent of the total U.S. population—California produces and distributes the highest volume of fruits, tree nuts, berries, melons, vegetables, and milk for distribution in other statesof all U.S. states. Furthermore, California has been on the cutting edge of adopting new technologies and implementing early innovations ranging from the development of new crops to the mechanization of harvests by innovative tractor designs.

However, the climate and labor conditions that enabled California to become a national food leader are rapidly changing. Running a commercial farm has become an increasingly marginal business for many farming families, as climate challenges across the state include multi-year droughts, intense wildfires, dwindling water supplies, and potential future “megafloods.” This report examines various opportunities to expand agriculture and the many challenges confronting the industry in the short term and long term.

“For decades, California has been a cornucopia of food production feeding Californians, Americans, and many others around the world. We are now facing a novel future of system-wide water shortages, warmer year-round temperatures, and other food production stressors including wildfire and megaflood disasters,” said  Anastasia Telesetsky, author of the Future of California’s Agriculture Food Systems report and Professor at California State Polytechnic San Luis Obispo’s College of Agriculture, Food and Environmental Sciences. “California’s food producers will need to adapt to these system-wide changes. With this challenge will come new innovative ways of feeding ourselves including indoor farming and alternative protein production that will hopefully offer new opportunities to build a more equitable and sustainable food system.”

These California 100 reports on policies and future scenarios are the first step in a multi-stage process that is designed to inspire and engage Californians—from a variety of sectors and all walks of life—to build a stronger future. In the summer of 2022, California 100 expert and intergenerational Commission will conduct a series of listening sessions throughout the state, to solicit feedback on the ideas generated by our research and to generate additional big and bold ideas for consideration by public and private agencies, as well as by everyday Californians. Insights will also be generated from the policy innovation projects throughout the state that cover a variety of topics, and our deep engagement on questions of science and technology as they relate to a variety of issues, including transportation and urban planning.