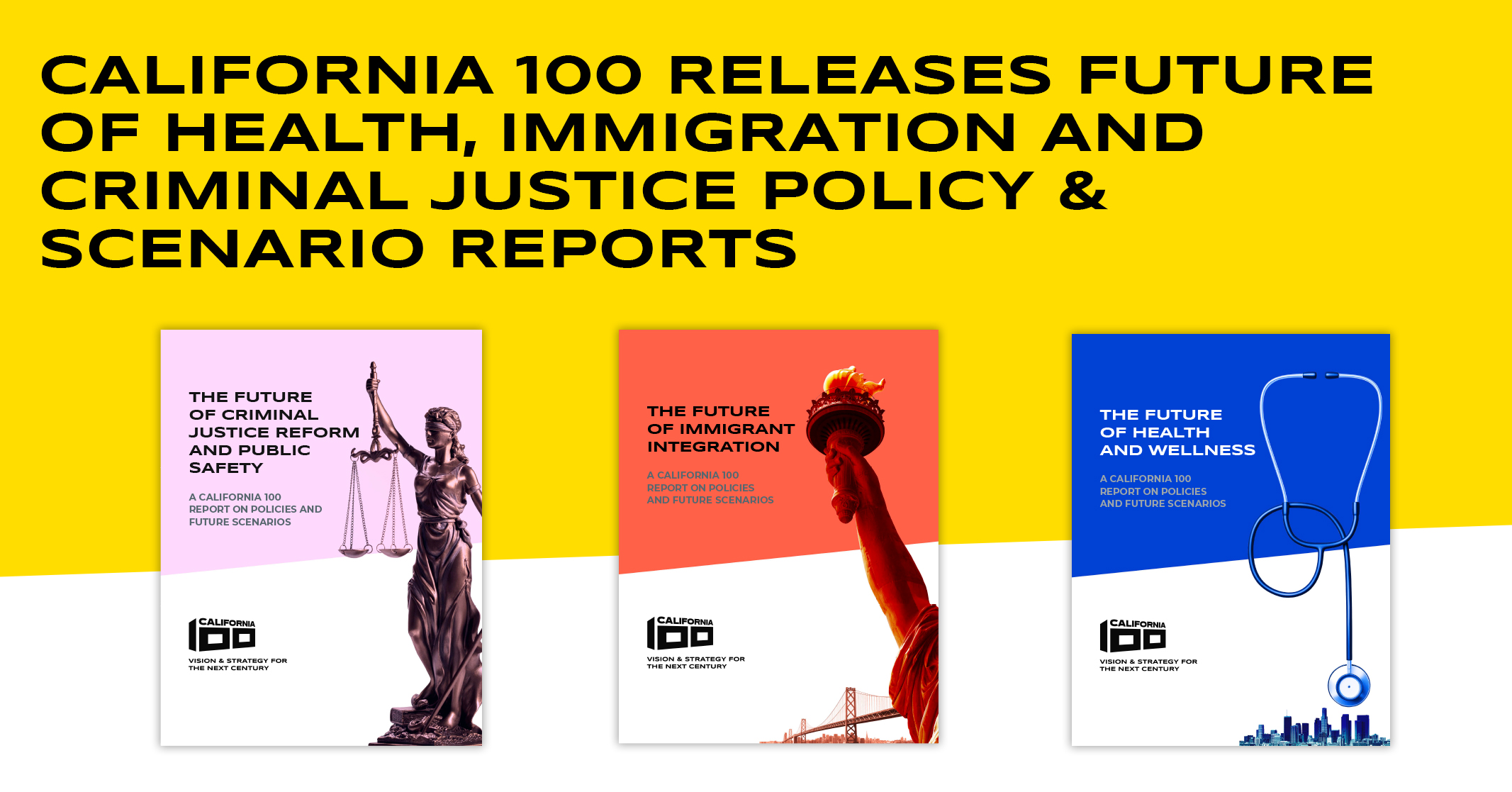 California 100, a new research and policy initiative incubated at the University of California and Stanford University, released today its next round of policy and future scenario reports focusing on the future of health and wellness, immigrant integration, and criminal justice and public safety in the golden state. The reports examine where California has been and where it currently is within these policy domains, while proposing innovative ideas that California can consider to propel the state toward an inclusive, sustainable and equitable future in the coming decades and century.

“With the release of our future of health, immigrant integration, and criminal justice and public safety reports we are keeping the momentum going across California by highlighting possible scenarios for our future if we act and change course, or keep the status quo,” said Karthick Ramakrishnan, Executive Director of California 100. “We are humbled by the response and added value this world-class research is providing policymakers and stakeholders at all levels, in all regions. We thank our research partners at UC Irvine, UCLA and USC for their important work over the past year to bring these reports to life.”

The research was led by Henry Brady, Director of Research for California 100 and former Dean at the UC Berkeley Goldman School of Public Policy. California 100 is partnering with Institute for the Future and 20 research centers across the state to examine future scenarios with the potential to shape California’s leadership in the coming century, with a focus on 15 priority research areas.

The Future of Health and Wellness in California

California is a bellwether for the United States, providing lessons and examples of the successes and major challenges faced by health systems that aim to achieve health equity for a diverse population. California’s healthcare delivery system has largely been successful in providing coverage and access to care compared to other states in the U.S. However, important challenges remain for California given the approximately 7.7 percent of its population that remains uninsured and the presence of wide disparities in health outcomes across socioeconomic groups, racial/ethnic populations, and regions of California. These disparities suggest that if California is going to remain a leader in health care, it must address current shortcomings and establish long-term fixes to stay at the vanguard into the future.

“There are positive signals in California that the state is ready to tackle social and structural social determinants to achieve better health and wellbeing in the state,” said Ninez A. Ponce, PhD, MPP, professor in the UCLA Fielding School of Public Health’s Department of Health Policy and Management and is the Director of the UCLA Center for Health Policy Research. “The positive signals from the state’s initiatives on aging and Medi-Cal offer some testimony to the beginning of a shift away from the current sickness system. These initiatives are also poised to become a major source of evidence of how integrative policies might change the health and wellness of diverse Californians. Political gridlock may have prevented bold health initiatives in the past, but an integrative approach to health and wellness that brings in partners from multiple sectors might actually open up paths towards policy changes given our unified dream for a healthier California.”

The Future of Immigrant Integration in California

California is often thought of as an immigrant-rich state. There is good reason for that portrayal: over one-quarter of the state’s population is foreign-born; one-third of the workforce is immigrant; and nearly half of California’s children have at least one immigrant parent. Yet California’s world is changing—the share of the state’s population that is foreign-born has been on the decline for the past several years and has been shrinking for much longer in several of the state’s traditional receiving areas, such as Los Angeles and San Francisco. California now has the most settled immigrant population in the nation, as measured by years spent in the U.S. Because of this shift in the population—fewer inflows from abroad, more children being born to immigrants, and the more settled nature of the foreign-born—the important tasks in the decades ahead center on encouraging the successful integration of immigrants and ensuring that there will be enough future immigration to continue fueling California’s prosperity.

“California can’t take immigrants for granted,” said Manuel Pastor, professor of sociology and American studies & ethnicity at the University of Southern California and Director of the Equity Research Institute. “We must match our welcoming rhetoric with actionable policies and genuine opportunities. At stake is not just our reputation as an immigrant-rich state; what also hangs in the balance is our ability to sustain the California Dream for generations to come.”

The Future of Criminal Justice Reform and Public Safety in California

“When it comes to public safety and criminal justice reform, California has done many things right. But, it also has fallen short,” said Charis E. Kubrin is a professor of Criminology, Law and Society at the University of California, Irvine’s School of Social Ecology. “Corrections spending has not tracked with population declines, and costs remain high. California’s total spending on corrections now approaches the state’s total spending on higher education, and a year of college in the UC system costs significantly less than a year behind bars. Despite this spending, crime rates have not fallen proportionately, suggesting the state is reaping diminishing crime-control returns on its incarceration investments. Which path will California choose? That’s a critical question, not the least because when it comes to criminal justice, as California goes, so goes the nation.

These California 100 reports on policies and future scenarios are the first step in a multi-stage process that is designed to inspire and engage Californians—from a variety of sectors and all walks of life—to build a stronger future. In the summer of 2022, California 100 expert and intergenerational Commission will conduct a series of listening sessions throughout the state, to solicit feedback on the ideas generated by our research and to generate additional big and bold ideas for consideration by public and private agencies, as well as by everyday Californians. Insights will also be generated from the policy innovation projects throughout the state that cover a variety of topics, and our deep engagement on questions of science and technology as they relate to a variety of issues, including transportation and urban planning.