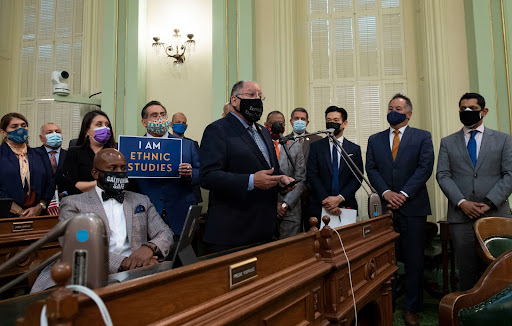 In October 2021, the Legislature passed and Governor Gavin Newsom signed into law Assembly Bill 101 – a historic bill which makes California the first state to require Ethnic Studies as a high school graduation requirement. The law requires that students in the class of 2030 take one semester of ethnic studies, and schools must offer these courses starting in the 2025-2026 school year. Ethnic studies is the interdisciplinary study of race, ethnicity, and other identities, focusing on people’s lived experiences and perspectives. According to the model curriculum overview, the focus of this law is to provide students the opportunity to learn about  the histories, cultures, struggles, and contributions to American society of historically marginalized peoples, which have often been untold in US history courses.

These courses provide students with the opportunity to see themselves and their family’s experiences reflected in the curriculum and the opportunity to learn about the life experiences of others with different backgrounds. Additionally, this course will provide space for students to learn about the living history in their own communities and the opportunity to broaden their own conceptions of their communities. One Stanford University study found that students at risk of dropping out saw an increase in participation and school attendance once enrolled in ethnic studies courses. This may lead to an increased number of credits earned and even an increased probability of enrolling in college.

Assemblymember Jose Medina (D-Riverside), a longtime educator and former ethnic studies teacher, championed this bill. From his perspective, “The inclusion of ethnic studies in the high school curriculum is long overdue…Students cannot have a full understanding of the history of our state and nation without the inclusion of the contributions and struggles of Native Americans, African Americans, Latinos, and Asian Americans.”

In 2010, the San Francisco Unified School District ran a pilot program to evaluate the effects of ethnic studies courses on students. In 2019, after witnessing the  positive impacts of these courses on students, the program was expanded to include all 19 high schools in the district. From there, other districts throughout the state have debated including ethnic studies curriculum, such as Oakland, Los Angeles, and Pico Rivera. This widespread push for ethnic studies would not be possible without organizations like GENup, Diversify Our Narrative, and Teach Our History California, and their work to organize across the state while centering student voices.

In a state as diverse as California, it is imperative that the stories of historically marginalized groups are shared,celebrated, and uplifted as a driver for positive social outcomes. After a decades-long battle, AB 101 marks a pivotal step forward towards healing and a more inclusive California that celebrates the contributions of its people.