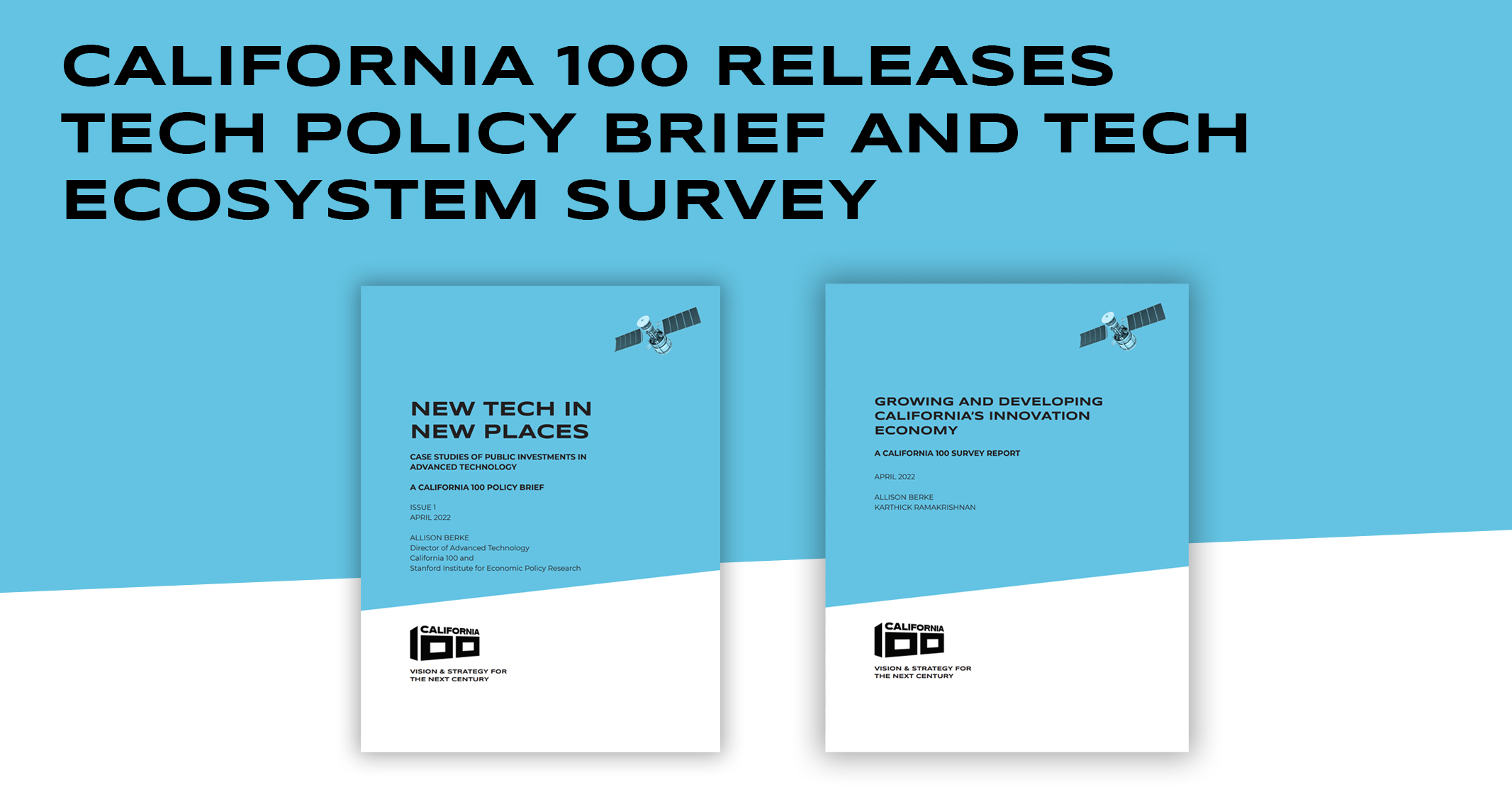 April is innovation month, and California 100 is marking the occasion by releasing two publications on advanced technology: a new policy brief on growing new tech in new places and a survey highlighting expert opinion about the current state of play for tech in the state and their views on its potential future. The white paper and survey build on California 100’s advanced technology work including a Tech Policy Hackathon held at Stanford earlier this month, the release of the Future of Advanced Technology Policy and Scenario report, and a recent OpEd in the Los Angeles Daily News by California 100 executive team members, and a briefing with the California Legislative Technology and Innovation Caucus.

“California’s innovation economy has the opportunity to grow in exciting ways over the next hundred years, building on its existing strengths in computer science, artificial intelligence, and biotech and growing its leadership in clean energy, climate resilience, and sustainable agriculture,” said Allison Berke, Director of Advanced Technology for California 100.

“California is widely recognized as a global leader in science and technology innovation, but we cannot take that leadership for granted,” noted Karthick Ramakrishnan, Executive Director of California 100. “By focusing public investments on solving our biggest long-term challenges, and by prioritizing inclusion and equity across regions and communities, we have the chance to build a much brighter future for the state’s economy and society,” he added.

STEM Leaders Survey on California’s Innovation Economy
California 100 wanted to hear directly from industry leaders about what they see as the potential shortcomings and areas of strength for STEM in the state.

Key findings from the survey included:

Tech Policy Hackathon
Speaking of the next generation of scientists and technologists, Stanford recently hosted the SIEPR – California 100 Technology Policy Hackathon, an event that brought together more than 60 students and young people from across the state to develop their best policy ideas for improving California through technology. This Hackathon, co-sponsored by the Stanford Institute of Economic Policy Research (SIEPR), did not involve writing any code, but instead focused on developing new ideas for public policy in California that leverage technology to improve the future of California. Participants ranged from undergraduate freshmen to early-career professionals, ages 18-35, and spanned the state geographically, including UC San Diego(UCSD), California Institute of Technology(Caltech), the Keck Graduate Institute, UC Riverside(UCR), UC Berkeley, Stanford University, Loyola Marymount University(LMU), California Forward, Canadian Solar, and San Bernardino Community College.

Let a Thousand Silicon Valleys Bloom: OpEd
Building on these reports, California 100’s executive director and director of advanced technology published an op-ed in the Los Angeles Daily News suggesting that California invest in drawing tech startups and advanced manufacturing to regions of California that are less tech-dense than LA and the San Francisco Bay Area, but which are home to large populations of UC and CSU STEM graduates looking for jobs that utilize their skills without unnecessarily concentrating them in high cost-of-living regions of the state. Through targeted investment and tax incentives, including an expansion of the R&D credit, Karthick and Allison suggest that California could let a thousand Silicon Valleys bloom, creating silicon deserts and silicon hills where the next generation of the science and tech labor force is waiting.

As California makes decisions about tech policy, STEM education funding, and innovation centers to support research and technology commercialization across the state, California 100 and SIEPR aim to guide and inform those decisions, to create the best possible version of the future for California.