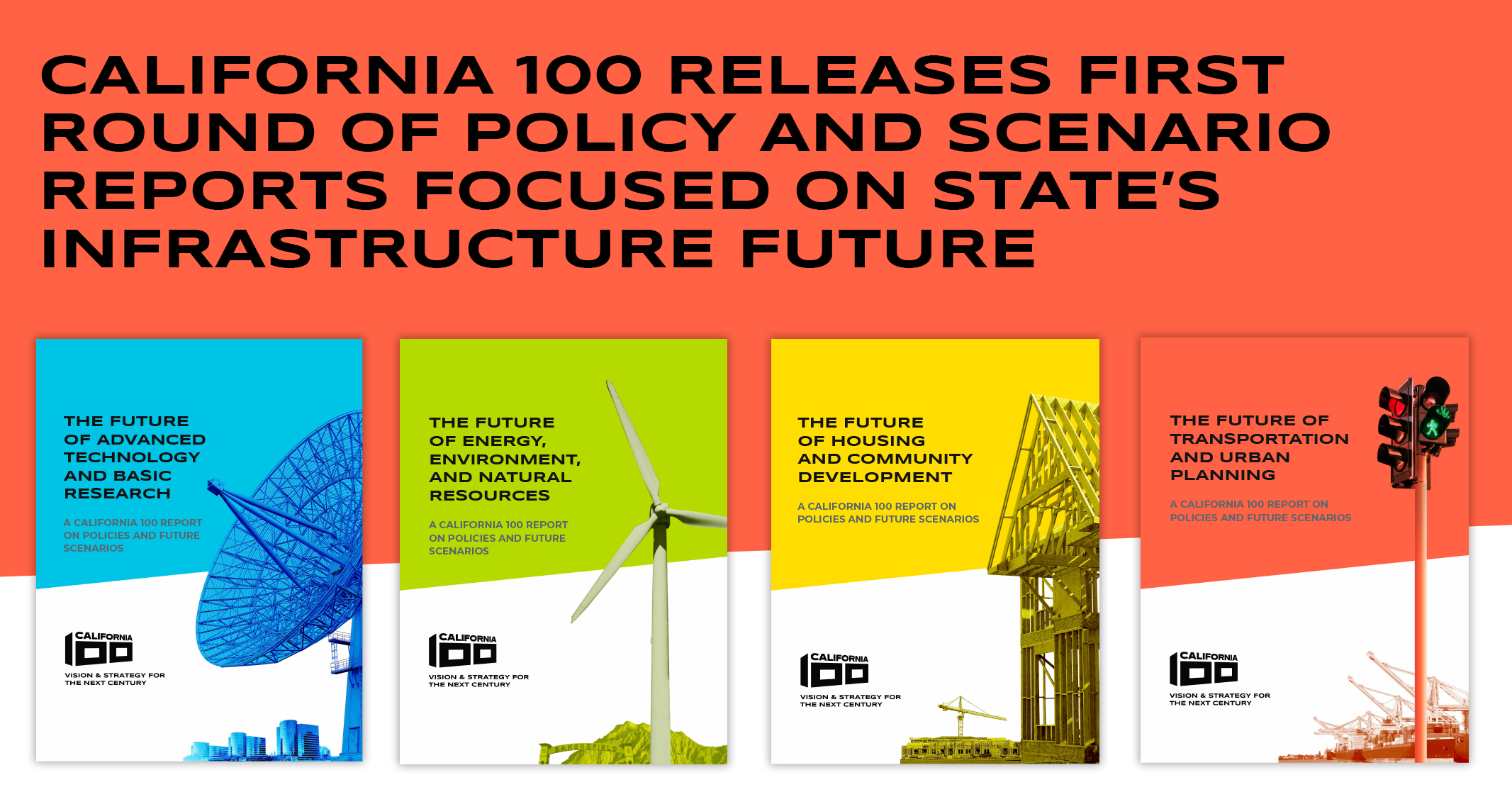 California 100, a new research and policy initiative incubated at the University of California and Stanford University released today its first four policy and future scenario reports focusing on the future of advanced technology, energy, housing, and transportation in the golden state. The reports examine where California has been and where it currently is within these policy domains, while proposing innovative ideas that California can consider to propel the state toward an inclusive, sustainable and equitable future in the coming decades and century.

“After months of diligent research by our partners across the state, we are excited to share their findings and kickstart a conversation about the policy options that move us toward the future we all want to see,” said Karthick Ramakrishnan, Executive Director of California 100. “This isn’t your typical research and policy initiative. In addition to engaging a diverse group of stakeholders and experts within each policy domain, our research partners also examined scenarios for the future that showcase what happens if we keep the status quo or go backwards, and what’s possible if we think big and bold — with our sights forward.”

The research was led by Henry Brady, Director of Research for California 100 and former Dean at the UC Berkeley Goldman School of Public Policy. Brady and Ramakrishnan authored an OpEd to introduce California 100’s work this week and in the coming months.

The Future of Advanced Technology and Basic Research

The worldwide perception of California’s leadership in technology and innovation has attracted scientists and technologists to its universities and research laboratories from around the world for decades, as well as investors and startups to its cities. Can we sustain this trend? Science and technology leaders have growing concerns with a range of issues that over time could erode California’s technology leadership and the jobs, tax, and other benefits it delivers such as retaining talent and the high cost of living, among them. Or at least it might if we do nothing. This Report explores opportunities to keep California at the vanguard of tech innovation well into the future.

“California needs to address its business climate issues, support its public universities, include more women and minorities in its innovation economy, keep the door open for global talent, address climate change and its impacts, and ensure that affordable housing is available for current and future Californians,” said Sean Randolph from the Bay Area Council Economic Institute. “California’s science and technology assets are unique, but it would be a mistake to take today’s technology-based prosperity for granted.”

The Future of Energy, Environment and Natural Resources

A prosperous and livable California depends on a stable climate and sustainable energy and water supplies. Today, California has neither. This Report describes water policy as a critical example of what must be done to adapt to climate change. Because California has already taken important actions to decarbonize and because it seems highly unlikely that California will reverse course, the report also highlights California’s opportunity to influence other states and national governments through its climate policy innovations into the future.

“The current climate crisis requires us to redouble efforts to reduce dependence on fossil fuels,” said David Wooley from the UC Berkeley Goldman School of Public Policy Center on Environmental Public Policy. “California must achieve a Net-Zero Carbon Economy by mid-century with deep reductions by 2030.  We can do that. California has already achieved strong momentum toward a zero-carbon electricity sector, achieving a 50% reduction in carbon emissions since 2008. Progress on clean energy, air quality and climate stability depend on an escape from fossil dependence and on California leadership nationally and internationally.”

The Future of Housing and Community Development

This Report explores whether California can solve the housing crisis with stronger protections and subsidies for the state’s most vulnerable residents, or by building our way out, creating millions of homes to meet soaring demand. As the Report examines through interviews with dozens of housing experts from across the state, the answer is both. They suggest that any future that doesn’t include true social equity and housing abundance is a bleak future.

“California’s housing experts agree: We need a ‘Yes, and’ approach to housing—yes to more homes, and yes to a social equity agenda. These solutions are popular, and packaged together, they form a vision of the future—one of security, fairness, sustainability, and choice—that Californians are ready to embrace” said Report authors Shane Phillips of the UCLA Lewis Center, Carolina Reid of the UC Berkeley Terner Center for Housing Innovation, and Dana Cuff of cityLAB UCLA. “It’s a vision that is idealistic but achievable, and California deserves nothing less.”

The Future of Transportation and Urban Planning

Today, much of the state is laced with noisy, polluting, and increasingly congested freeways, many of them cutting through disadvantaged communities. Policies favoring driving over other means of getting around have for decades received little scrutiny, even as many of our metro areas have grown to where traffic congestion is now endemic. The research team at the UCLA Institute of Transportation Studies sifted through reams of data and research and spoke with a wide array of experts in the public and private sectors to examine possible scenarios and policy alternatives for the future.

“Our analysis found that California’s reliance on low-density, sprawling development, with its wide streets and freeways and ubiquitous free parking, requires most Californians to travel by car for almost all of their trips, whether or not they own a car or want to drive that much,” said Brian D. Taylor of the UCLA Institute of Transportation Studies. “Building primarily around the car consumes a lot of land, costs a lot of money, and generates a lot of emissions. We need to shift this approach by deemphasizing cars by increasing commercial and housing densities, reducing or eliminating government parking mandates, and improving public transit.  Driving should become one option among many, as more travelers will be able to easily walk and ride transit to nearby destinations.”

These California 100 reports on policies and future scenarios is the first step in a multi-stage process that is designed to inspire and engage Californians—from a variety of sectors and all walks of life—to build a stronger future. In the summer of 2022, California 100 expert and intergenerational Commission will conduct a series of listening sessions throughout the state, to solicit feedback on the ideas generated by our research and to generate additional big and bold ideas for consideration by public and private agencies, as well as by everyday Californians. Insights will also be generated from the policy innovation projects throughout the state that cover a variety of topics, and our deep engagement on questions of science and technology as they relate to a variety of issues, including transportation and urban planning.